Join us for light fare, live music, and a chance to win one-of-a-kind raffle/auction prizes
Follow this link to purchase tickets / donate...

Did you know that it's horseshoe crab spawning season on the shores of Long Island?

Image Credit: Cameron Jenness
Every year during the full and new moon high tides from May through August (depending on latitude) horseshoe crabs make their way to shorelines up and down the eastern coast of the United States to lay their eggs in the sand. Horseshoe crab females can lay up to 88,000 eggs during one spawning period.

Horseshoe crabs have existed relatively unchanged for approximately 445 million years and have survived five mass extinctions. They are not true crabs and are more closely related to spiders and scorpions. They are harmless creatures and their tails or telsons are not used as weapons but rather to help them flip over if they get caught upside down.

There are four surviving species of horseshoe crab; Limulus polyphemus, the Atlantic Horseshoe crab, which can be only found along the eastern coast of the United States, and three other species found in various parts of eastern and southeastern Asia.
Horseshoe crabs are fascinating creatures that have ten eyes and copper-based blue blood. When horseshoe crab blood comes into contact with bacteria, a clot immediately forms around the bacteria. That is why horseshoe crab blood has been used in the biomedical industry for over 30 years to screen for bacteria in every pharmaceutical substance that enters the human body, including vaccines and surgical implants. Horseshoe crab blood has been a key element used during the production of Covid vaccines.

Horseshoe crabs are a keystone species, which means that removing them from their environment would have a drastic effect on the ecosystem in which they exist. This is especially true with regard to the relationship between horseshoe crabs and the migrating shore bird, the rufa red knot. Every year, red knots make a 16,000-mile journey from the tip of South America to their breeding grounds in the arctic. The largest horseshoe crab spawning ground in the US is in Delaware Bay, a key stopover point in the red knot migration route. The red knots stop there to refuel on fatty-rich horseshoe crab eggs.

Although horseshoe crabs have survived this long, man-made pressures threaten their existence. Between 1850 and 1920, horseshoe crabs were harvested and used as fertilizer. They are currently used as bait in the eel and whelk fisheries. Coastal development and shoreline hardening coupled with sea-level-rise is diminishing the range of spawning sites available to horseshoe crabs. It is also estimated that approximately 15% of Atlantic horseshoe crabs die as a result of being bled for biomedical use. 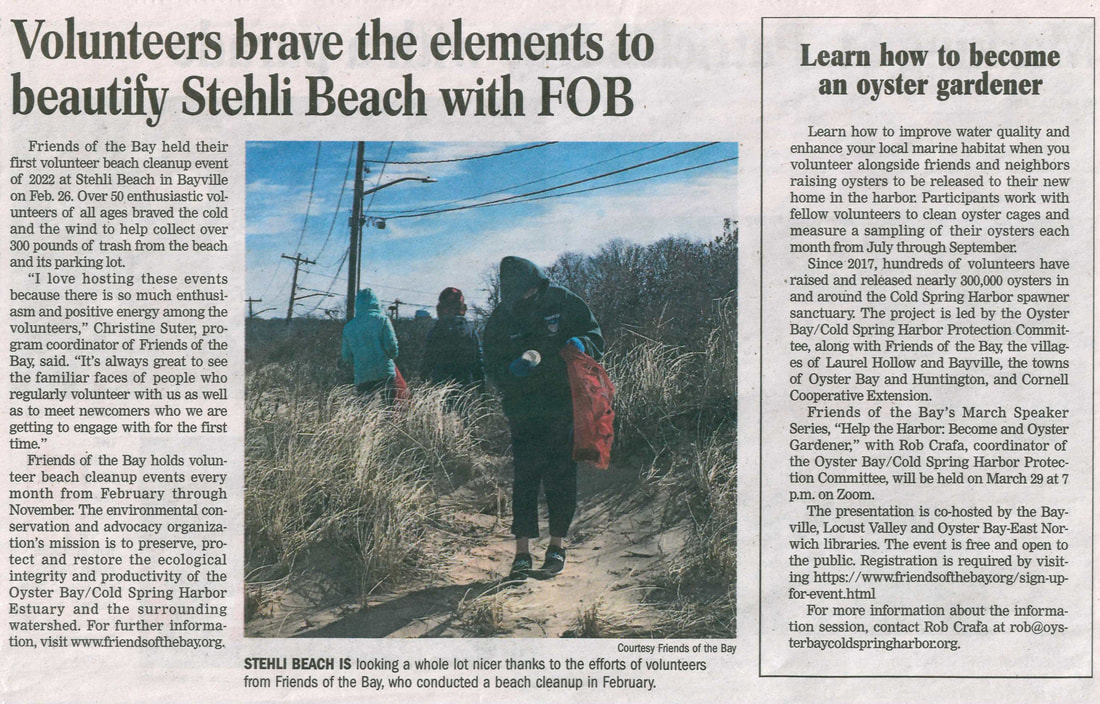 11/3/21
This letter is an alert to all who appreciate the ecological and scenic value of Oyster Bay and Cold Spring Harbor – those who enjoy the views, spend time on the beaches or cruising, sailing, fishing or paddling on the waterways.
Most residents know that regional water quality has been improving since environmental legislation was enacted in the 1970s, bringing upgraded sewage treatment and other strategies to reduce pollution.
But what many people in the area don’t know is that our shellfish population, particularly our namesake oysters, has suffered a serious decline. And fewer oysters and clams, which filter the water, means dirtier water and a threat to the livelihood of commercial harvesters and the health and enjoyment of recreational users.
To deal with the problem, several steps should be taken. Friends of the Bay’s leadership met recently with Town of Oyster Bay officials to share our recommendations on shellfish management. The town was very receptive to our suggestions and had already planned to implement many of them.
Friends of the Bay believes the following steps must be taken to improve the health of the bay and make the shellfish population sustainable for the long run:
Click here to continue reading.

By the Friends of the Bay Board of Directors 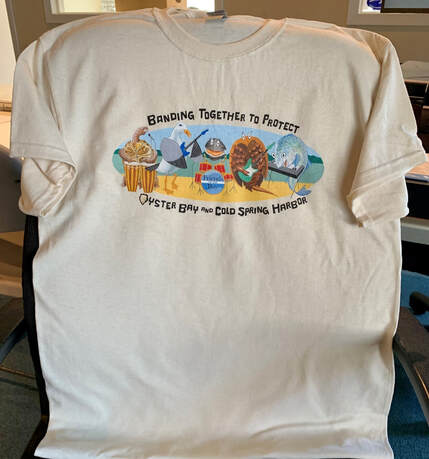 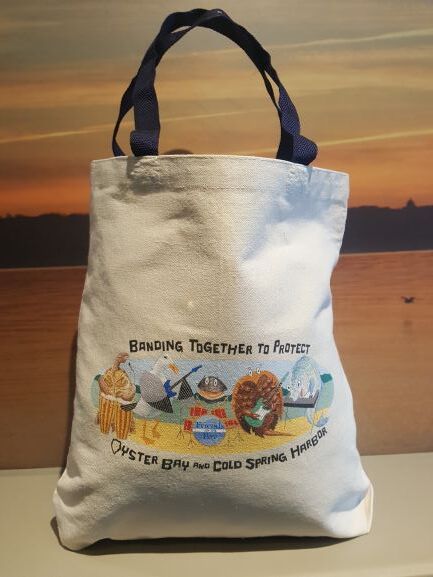 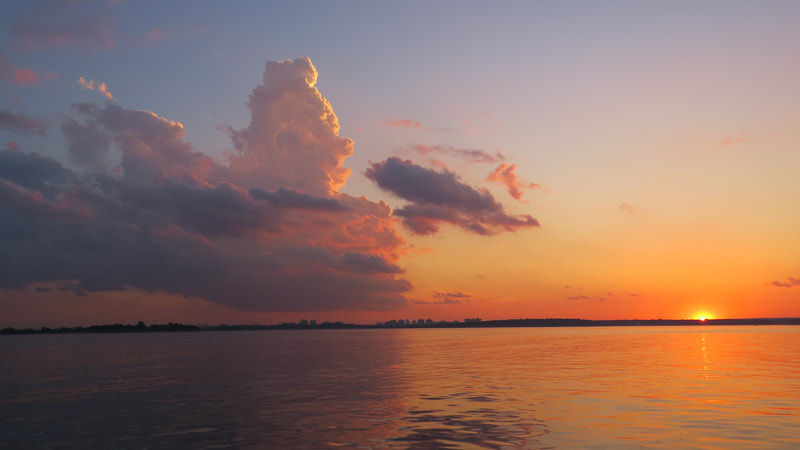 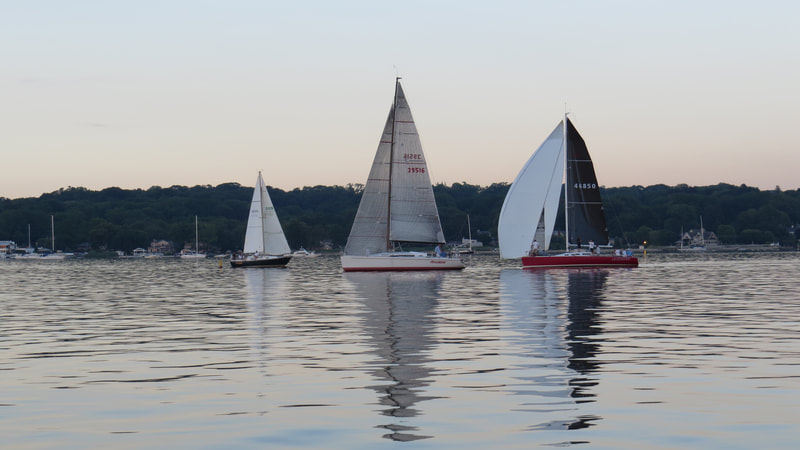 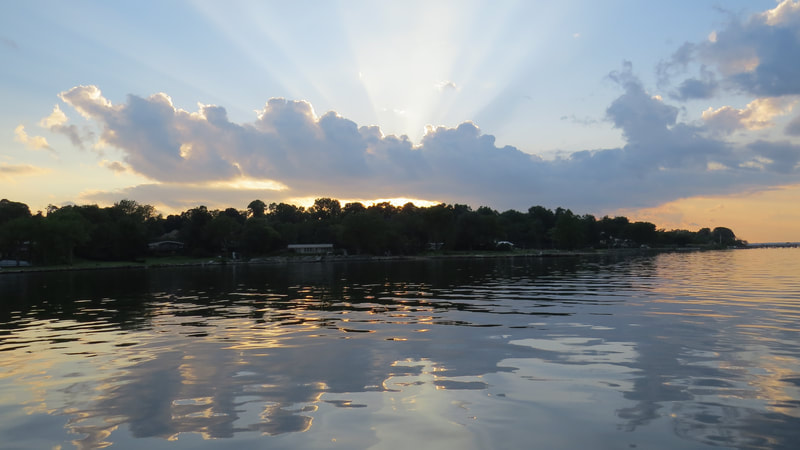 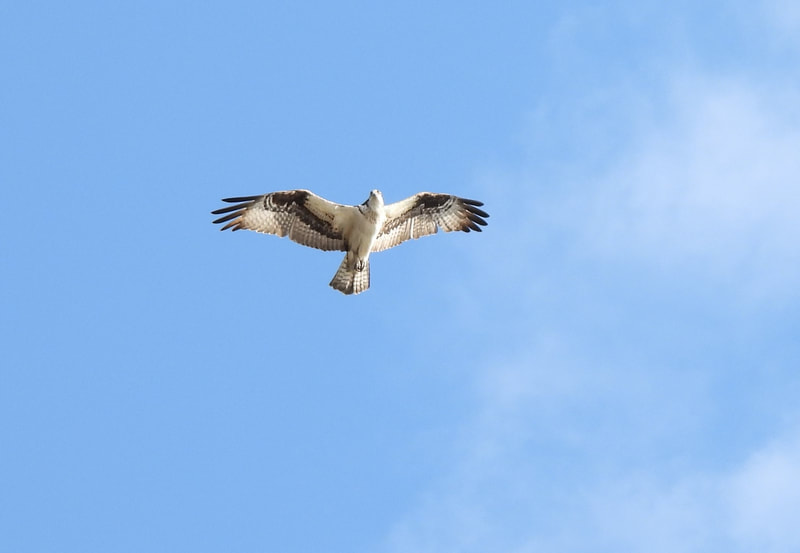