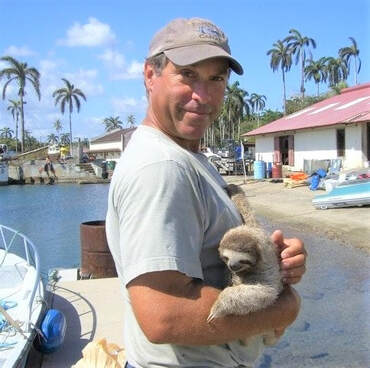 ​About Our Vice President, Mitch Kramer and His Views on the Environmental Impacts on the Local Waterways of Oyster Bay

Mitch Kramer has always loved being on the water.
“I got my first boat when I was seven or eight years old,” recalled Kramer, the owner of North Shore Towing & Diving who serves as vice president of
Friends of the Bay.
During his school years, teachers dismissed his interest in finding a career that would keep him on the water as impractical. But Kramer wasn’t convinced. “Why
can’t my hobby become my career?” he said. “I basically never listened to them.”
After graduation from West Chester University, he pursued his interest by starting a boating
business providing towing and salvage service for disabled boats. Now his company, which is an affiliate of GEICO and the Boat Owners Association of the United States with four employees, operates out of Oyster Bay and Huntington on Long Island as well as Stamford and Norwalk in Connecticut.
“I know I’m one of the few people who are able to do what they love as a career,” he mused.
Though his rescue work keeps him busy for most of the year, his career has provided unexpected opportunities, especially working on TV shows and movies including “Survivor” and  “Pirates of the Caribbean.” “We do all the logistical work,” he explained. “We not only do all the hiring of the boats and personnel, but also things in the background like safety and anything that may be used to help make that project work.”
But working in the fictional world of Hollywood hasn’t distracted him from the decline in the real-world environment around him. “I see a direct effect of environmental pressure in the bay. We have problems with reduced shellfishing populations on the decline, the natural habitats are on the decline, rising water levels and pollution,” he noted.
That’s why he finds protecting the marine environment so important. “My livelihood depends upon the water and not just my use of it, but others in the area,”
Kramer said. Because Oyster Bay has little development around its shoreline, it attracts a large boating population. “It’s been good to me and my career and
anything I can do to give back to help maintain it for future generations is something I feel very strongly about.”
His vast knowledge of local waterways and all the key players who use them has made him extremely valuable to Friends of the Bay since he joined the board last
fall. As the organization’s President Bill Bleyer said, “no one’s on the water as much as Mitch. He has expertise that no one else on the board has.”
Kramer encourages others to volunteer to help the environment. “I just hope people would reach out to organizations like Friends of the Bay,” he said. “There’re
so many ways for the public to get involved. People could even get out on the water and get their hands wet.”