​Our water quality monitoring program is one of the ways we serve as watchdogs of the health of our waterways. We post data from each monitoring run on our website as soon as it becomes available.

Besides taking water samples from each of the 8 sites we monitor, we also test for pH, salinity, temperature and dissolved oxygen (DO) using a sonde (water quality instrument).
​
But what does the data signify?

Dissolved Oxygen (DO) is required by all marine organisms. It fluctuates daily and seasonally as marine plants generate it during photosynthesis and marine animals consume it. Regulatory agencies have established DO concentrations below which the health of marine organisms is in danger and lower levels below which marine life is not possible.

Low oxygen is referred to as hypoxia and anoxia is defined as no oxygen. Low or no oxygen conditions can result from the decomposition of excess organic materials by microorganisms. Algal blooms are usually short-lived and when they die and decompose, DO is consumed. DO is measured in milligrams per liter. Organisms have their own individual tolerance range. The NYS Department of Environmental Conservation has determined that waters with DO below 3 milligrams per liter (mg/L) are hypoxic and uninhabitable for most marine organisms. DO  between 2 and 4 mg/L can cause harm to many organisms with prolonged exposure. Levels below 1 mg/L are considered anoxic and usually fatal for organisms.

Locally on several occasions, DO was found to be less than 3 mg/L in several Cold Spring Harbor locations and in three sample locations in Mill Neck Creek. Information from sampling conducted in 2015-2016 indicates that the estuary has an excess level of nutrients, especially nitrogen, a condition that frequently leads to low DO.

Salinity is a measure of the concentration of dissolved salts in water. For coastal waterbodies, it is measured in parts per thousand (ppt). Open ocean water is usually 30 to 35 ppt, whereas Long Island’s bays and inner harbors are usually 20 to 25 ppt. Salinity is lowered by freshwater inputs including stormwater runoff, treated wastewater discharges, and, most significantly on Long Island, by groundwater discharges. Groundwater north of the Long Island Expressway flows toward Oyster Bay and accounts for most of the freshwater flowing into the waterway other than during heavy rain. Salinity can increase during long dry and hot weather as evaporation increases. Salinity can increase if winter storms drive more saline Long Island Sound water into the estuary.

Many estuarine organisms tolerate a range of salinity, especially those that move around the estuary or live in the intertidal areas. Oysters are known to thrive over a wide range of salinity as do many of the bay’s fish species.

Seasonal water temperatures, along with dissolved oxygen, are important indicators of habitat quality for species inhabiting the estuary. Temperature dictates what types of plants and animals can live there. Estuarine plants and animals thrive within a specific range of temperatures. Water depth affects the daily temperature range – shallower water warms and cools more quickly than deeper water. If the temperature is out of the acceptable range it can adversely affect marine life. Prolonged high summer temperatures can reduce oxygen leading to dangerously low levels (hypoxia), which can lead to harmful algal blooms and fish kills or even no oxygen (anoxia). Events such as reproduction, migration and feeding by estuarine species are based on temperature. Changes in seasonal temperature are normal and conducive to marine life, but a sudden shift can cause stress and shock – even as small as one to two degrees.

According to the U.S. Environmental Protection Agency, water temperature also influences the rate of plant photosynthesis, the metabolic rates of aquatic organisms, and the sensitivity of organisms to toxic wastes, parasites, and diseases.

Like much of the world’s oceans, our local waterways have warmed, which has already led to changes in species composition, and long-term shifts can affect the amount and location of plants and animals. Many southern species have moved north. Northern species whose southern limit was Long Island have moved north. Lobsters, for example, are no longer abundant in Long Island Sound.

In an estuary, temperature can vary depending on depth, season, ambient conditions like wind and air temperature, tides, and water temperature from other connecting waterways.

pH is an important indicator of water quality. It is a measure of the acidity or alkalinity of water. Estuarine pH levels generally range from 7.0 to 7.5 in those areas that are primarily freshwater. The ocean pH is 8.1, but estuarine pH can vary between 8.0 and 8.6.

It is important to understand that each drop of one pH unit is a ten-fold increase in acidity. Bay water pH changes daily as the microalgae photosynthesize and respire. During the day, algae absorb CO2 during photosynthesis which raises pH. At night they, along with all marine organisms, respire which releases CO2 and drops the pH.

Nutrient inputs from stormwater and high nitrogen groundwater (from septic system discharges) will stimulate algal production which can increase daily pH changes.
Sediment bacteria continually break down the organic matter that has settled to the bottom. Those areas where organic matter accumulates will experience greater bacterial decay with the consequent increase in bacterial respiration leading to lower pH.

Measuring pH in Oyster Bay and Cold Spring Harbor is especially important as our bays support large populations of shellfish. The calcium carbonate shells of clams and oysters can thin when subject to lower pH. Ocean acidification has been cited globally as a growing problem for shellfish.

Turbidity can be caused by phytoplankton growth, runoff or sediment transport from streams and rivers, or discharges from sewage treatment plants.

Turbidity can affect water quality and the health of an ecosystem by limiting photosynthesis and ecological productivity below the surface, smothering spawning beds and reducing gill function in fish. 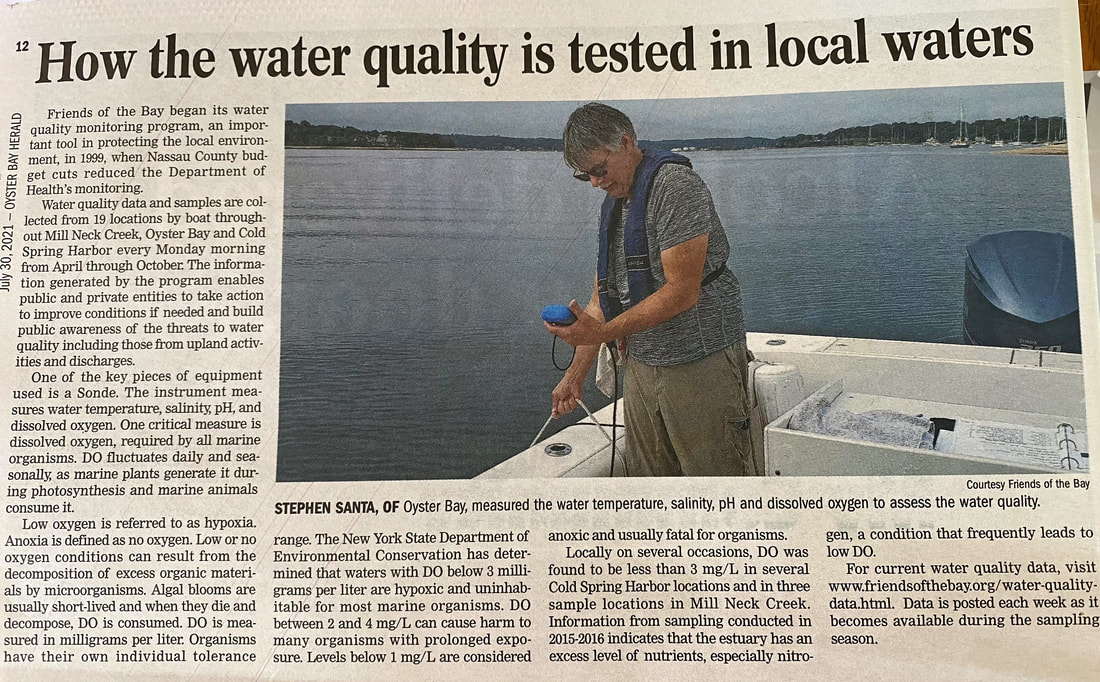 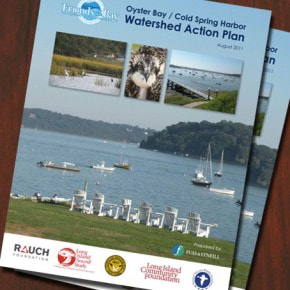 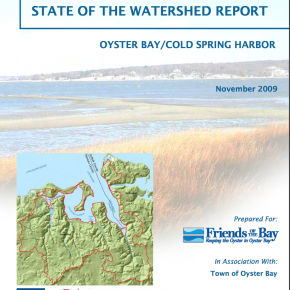 State of the Watershed

The State of the Watershed Report summarizes existing environmental and land use conditions in the watershed. It is a comprehensive document that integrates many environmental indicators to assess the current health learn more